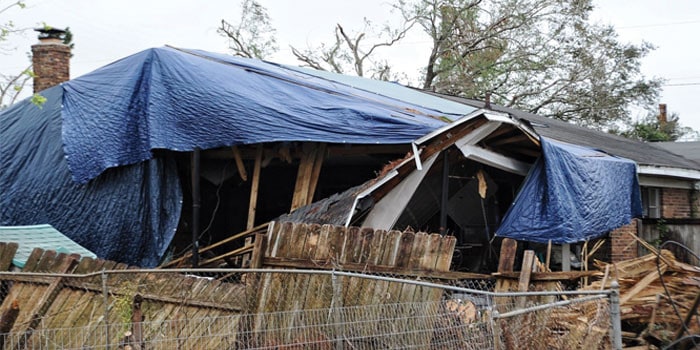 SUMMER ISSUE 2019 (Spray Foam Magazine) – In 2018, Hurricane Michael devastated the gulf coast of Florida. It was the strongest storm to ever hit the Florida Panhandle, with landfall wind speeds recorded at greater than 120 mph. Winds this strong mean flying debris, broken windows, and roof damage. After the physical damage occurs to buildings, then water and wind have access to the interior of the structure and can absolutely wreak havoc.

Wind uplift and roof blow off is a major concern that gets a lot of attention in hurricane prone areas, and rightly so. Once the roof of a home is blown off, even partially, water can enter the building, can cause lots of damage and can easily make a house unlivable. Furthermore, insurance companies say that when a roof deck failure occurs during a storm, losses often exceed 50% of the structure’s insured value and can easily result in a total loss of the property and its entire contents. Now, damage may not be entirely avoided by keeping the roof deck intact, but if we can design roof systems that are less prone to failure, and can resist more wind uplift pressure, at least the damage can be minimized.

One good piece of news is that after windows, roof deck uplift is the most common damage caused by hurricanes; and this is good news because as a spray foam professional, you can offer a solution that strengthens roofs, increases uplift resistance, and reduces the effect of hurricane wind on roofs. It is called closed-cell spray foam insulation.

When closed-cell foam is applied to the underside of roof deck sheathing, specifically at the sheathing-to-rafter connections, it helps glue the roof system together and can double or even triple the strength of the roof assembly, which will increase the roof sheathing’s resistance to wind uplift.

In a 2011 study1 by Datin, Prevatt, and Pang, they conducted wind uplift tests on panels retrofitted with closed-cell spray foam using three configurations:

The results showed that these closed cell spray foam retrofits increase the wind-uplift capacity of the wood roof panels by as much as 250% to 300%.

This is great news for builders and homeowners that might be affected by hurricane force winds. And now that you know about the potential of closed-cell spray foam, it’s your job to educate your prospects, share this information with them, and win more business.

Direct any questions you have about statements made in this article to Robert Naini: 817-983-3544 | [email protected]

About the Author Robert Naini has a Bachelor’s of Science in Mechanical Engineering and an MBA from the University of Texas in Arlington. With more than a decade of experience on the cutting edge of spray foam insulation, he has helped hundreds of owners and managers grow their business with a unique knowledge base including spray foam sales and marketing, employee and applicator training, building science awareness and building code expertise. Spray Foam Advisor offers web-based training and education, with videos, articles, blogs and more, to help solve problems for spray foam professionals and the construction industry.

*Spray Foam Magazine does not take editorial positions on particular issues; individual contributions to the magazine express the opinions of discrete authors unless explicitly labeled or otherwise stated. The inclusion of a particular piece in the magazine does not mean that individual staff members or editors concur with the editorial positions represented therein.

Get In Touch With Us